Breadfruit is used more like a vegetable than a fruit. However, it doesn't matter what you or I may call it because it tastes sweet when ripe.

So at different stages of its development you may use this delicious tree vegetable/fruit for one purpose or another, and choose to call what you will…vegetable before it’s ripe and then fruit when ripened. We have a little name for it though…Bresheh, Yah Mon!

As the history goes, it was brought to Jamaica from Tahiti by Captain William Bligh on his second voyage to the South Pacific in 1793. His main reason for introducing breadfruit to Jamaica was to feed the slaves.

But the slaves did not like the taste, so the fruit/vegetable just stayed there and grew uncontrolled and meaningless for awhile; it was mainly fed to hogs. Well the years went by and people became interested in this fruit/vegetable, and the ball started to roll, so to speak.

Everybody in Jamaica loves this vegetable; we use it in many different ways to make breakfast, dinner, and snacks. We also add it to soups and, of course, make chips. It can be boiled, steamed, roasted, fried or made into punch.

Like its name, it tastes like doughy bread. Oh yes, its bite is quite similar to some breads I have eaten, but it has more moisture, even when roasted. Some people use the leaves as a remedy for headaches, too.

Even though some people think that it's just a green vegetable that you can just roast or boil any old way, they are sometimes surprised at the results after cooking.

My aunt Brownie taught me a valuable lesson when I was about 15 years old. To make a long story short, she asked me to go to the market to get some scallions, thyme, and a breadfruit to make soup. I returned with all that she had asked me to buy, only to find out that I had bought a roasting breadfruit instead of a soup breadfruit.

When you go to the market to buy your breadfruit to make soup, buy the one that is light green...get one that is young or borderline young with no brown spots on it.

Rub your hand over the skin and slightly squeeze the vegetable to make sure there is no hidden damage like scrapes and cuts. This will ensure your using a quality bresheh. Cool?

The ones that are dark green and "fit," are good for roasting. If the breadfruit has brown spots it is becoming ripe, you can also roast it but it will be a little sweet and soft when it is finished.

Although roasting is one of the most popular ways to enjoy this vegetable, other methods have been used to bring out the flavor and versatility of bresheh. And, breshehs can be eaten with any meat or "salting" which you can provide, even coconut oil. 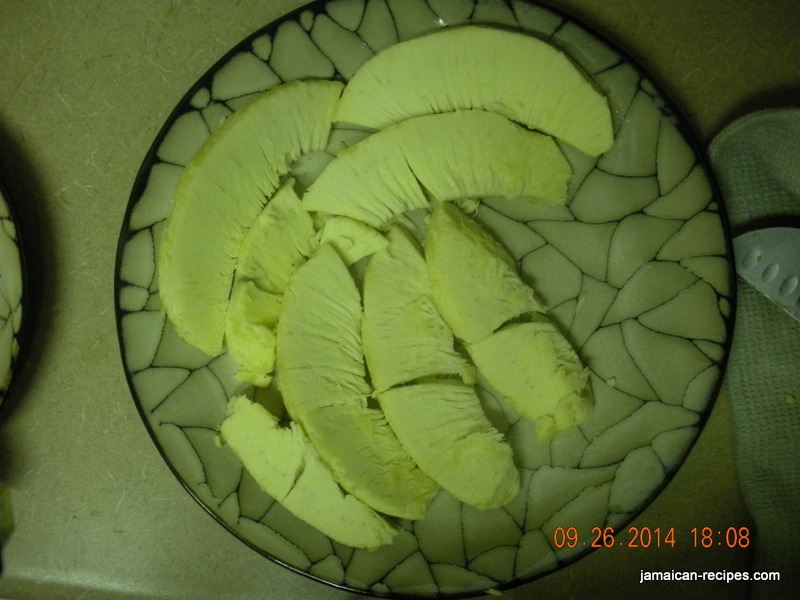 Let’s prepare your bresheh in the following ways:

Cut the stem from the bresheh and discard it. Use a sharp knife and make two incisions crossing each other to make an x in the top of the vegetable. These incisions will allow the vegetable to breathe as it is roasted.

Just to make sure the vegetable is thoroughly roasted, turn it onto the side for another ten minutes, rotating it slowly as it roasts.

Remove the bresheh from the stove, and slice it in halves at the incisions made earlier. If it’s not completely roasted, it’s no problem. Put the halves back onto the fire and roast for another five minutes.

Turn off the stove and remove the vegetable. Allow it to cool for about an hour. Now, carefully peel the blackened roasted skin with sharp knife. Then remove the center piece or the heart as it is sometimes called. Cut 1-inch slices along the length of the vegetable and arrange them with your favorite meat or meat-kind.

Make a salt and water solution to taste then soak the slices in the solution. Heat the oil in the iron skillet or frying pan. Use a paper towel to remove the excess water from the slices and then place them into the hot oil…fry until golden brown.

Be careful that all the water is removed from the slices before you place them into the frying pan.

You can also use coconut milk instead of water to make your soaking solution. It gives the chips that coconut flavor.

Cut off the stem and cut the vegetable into quarters. Remove the heart with a sharp knife and then peel the skin. Add the bresheh to boiling water with salt and other vegetables like yams, bananas, pumpkins, and potatoes. Boil for an hour and then serve as an accompaniment with other vegetables, meat or fish.

Put water on stove and turn fire on high. In the meantime remove the skin and heart from the bresheh. Cut the vegetable into small pieces. Add pieces to an electric blender with a little water and puree.

Add pureed ingredients to boiling water and then add salt. Allow the vegetable to boil, occasionally stirring the pot. To thicken the porridge, add the flour to one cup of cold water and mix into a liquid paste. When the breadfruit is cooked, add other ingredients and sweeten to taste.

You may also omit the flour and thicken the porridge by evaporation; cook until it thickens naturally.

Cut the fruit into quarters and remove the heart and seeds. Remove the skin with a sharp knife. Boil the pieces in water on medium fire until they are soft. Pour some of the water from the pot into an electric blender with pieces of fruit and then blend until smooth.

Add all the other ingredients to the mixture when finished and stir with a wooden spoon. The thickness of the punch is dependent upon the amount of water you use. Add ice cubes to the punch and set in the refrigerator for about two hours.

Return to Jamaican Breakfast from Breadfruit